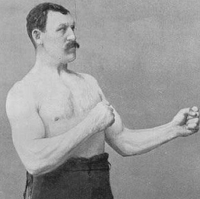 Today's blog post is by David Hetrick, chief deacon at The Oasis:

When the day-to-day job just isn't as fulfilling as it used to be, one thing I have found that brings immediate satisfaction is volunteering at the Oasis Renewal Center.  Last weekend I was carving walking paths around the chapel, and carving out swaths of grass where the labyrinth and the greenhouse will be.  It was satisfying to be able to look at my work as God’s work!

The Oasis sits near the border, nestled between the scrub oak forests that extend into Mexico and the rolling cattle lands of southern Arizona.  It's covered in wild prairie grass, yuccas, junipers, oaks, and cacti.  It’s a wild place so I had to buy the Brush Annihilator 4000 to cut the paths through the woods! The review said this machine "Whacks weeds like a sheep on steroids." There's something innately satisfying - and really manly - about that, so I tried it out. The reviewer was correct.

After two days of cutting, whacking, raking, scraping and trimming, I could clearly see that I had made a difference. I felt like I was doing the Lord’s work. Ministry doesn't all have to be indoors, you know.

As we go through each day following God's calling as leaders, it’s good to be able to reconnect directly with God.  Two days at the Oasis might be just what you need!

"Whatever you do, work at it with all your heart, as working for the Lord, not for human taskmasters, since you know that you will receive an inheritance from the Lord as a reward.
It is the Lord Christ you are serving."
Colossians 3:23-24
Posted by Susan J. Hetrick at 5:00 PM No comments:

I mowed the lawn at The Oasis yesterday.

We have an old-fashioned, 2-wheeled, reel mower that you have to push. It does a terrific job cutting the grass as long as the grass isn’t too long, or you don’t run over a stick.  It took me two hours. Our grass was very long and I ran over lots of sticks.

If the grass is too long, the grass just kind of bends over as the mower passes over it. Then it pops back up and laughs. So you have to make several passes over that particular blade of grass, from various angles and different directions. It’s very much like a dance.

My grandfather DeeDee had a reel mower that hung in the little shed behind his house in Massachusetts. It maintained its fresh-cut grassy smell even if he hadn’t used it in months. It had a certain distinguished air about it. It also looked slightly dangerous - but in a respectful way - not in the horror movie kind of way.

I was in awe of DeeDee’s reel mower, and I always wanted to have one of my own. Reel mowers are unobtrusive and well-mannered. Reel mowers are much more sincere and unpretentious than their gas-powered cousins. And don’t even get me started on the electric models – those are obvious imposters.

So I mowed for two hours, enjoying the fresh-cut grassy smell, and working up a sweat. It was meditative and calming; very Zen-like, in a nostalgic, home-spun way. And while I mowed, I noticed the way the color of the grass changed depending on the angle which the mower cut it. I also noticed that our grass was abnormally long and our yard was full of sticks. But I considered it an honor to cut the grass and dance.
Posted by Susan J. Hetrick at 12:22 PM No comments:

The Shape of Time 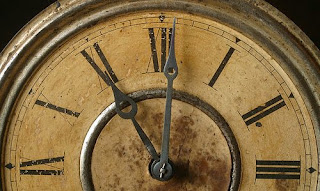 Recently I heard a very wise woman and a Spiritual Director say, "In our culture, time has lost its shape."

I was struck by her words, and just how profound they are. I hadn't ever considered that time had a shape, other than we tend to think of time in terms of a straight line. But time isn't really a straight line at all, is it?

Picture an old fashioned clock. On an old clock, time is round and it passes in one direction, marked off in little wedges, or sections of a circle. Before the invention of clocks, people marked the passage of time by seasonal cycles, and by the courses of the sun, moon and stars. The shape of those cycles was oval - fixed and dependable.

I believe that to God (who lives outside of it) time is more of a sphere. Time on a sphere can pass in any direction, and I think God sees all of it at once.Yes, this concept may seem a little bit sci-fi, but according to quantum physicists, space-time can bend, so why couldn't it be spherical?

In our digital culture, time is marked by a series of numbers, which seem to have no relationship to anything at all. 5:39 means nothing, in and of itself. However, within a context of a day, 5:39 can mean either very early morning, or early evening. In an even narrower context, it can mean the exact moment the sun will rise above the horizon on a certain day. One has to know the context in order to make sense of the marking of digital time. But even if we know the context, there isn't much of a shape to 5:39.

So what do you think? Does time have a shape? And if so, has it lost its shape?

Posted by Susan J. Hetrick at 5:29 PM No comments: